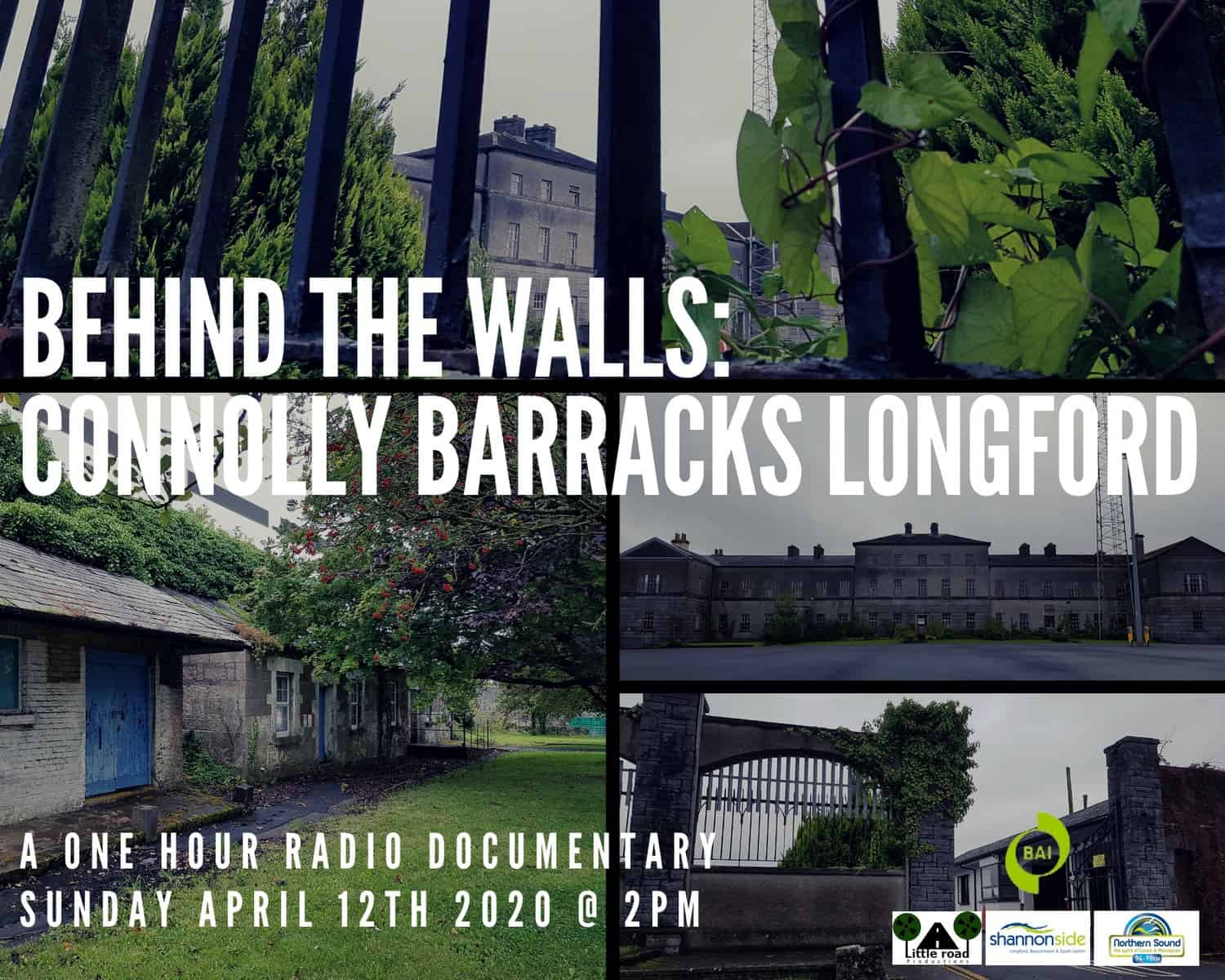 ‘Behind the Walls: Connolly Barracks Longford’ is the final one-hour radio documentary from a series of five documentaries broadcast on local radio stations across the country that explore the history of Defence Forces barracks situated within the region.  It follows on from the recent documentaries for LMFM Radio in Louth/Meath on Aiken Barracks, KFM Radio in Kildare on The Curragh Camp, C103 Radio in Cork on Collins Barracks Cork and Shannonside Northern Sound on Columb Barracks Mullingar.

For the majority of locals living and working in the towns across Ireland that have found themselves home to an army barracks, the daily goings-on behind the walls of each barracks are a bit of a mystery.  Despite their rich and varied histories – encompassing their buildings, their people, their events, their memorabilia and their artefacts – they remain an unexplored place to most.

This radio documentary series seeks to travel behind the walls of these Defence Forces barracks and camps across Ireland in doing so, offer listeners a chance to aurally explore what lies behind them, with the stories of the history they encompass told by those who know them best.

The documentaries take the form of a guided walking tour around the barracks intercut with interviews with local historians.  These interviews and tours, along with music and sound effects, allow the listener to experience the rich and varied history of each barracks and the places of interest behind their walls, along with their historical and social impacts on their localities and the wider local community.

Connolly Barracks is home to the oldest building still standing in Longford, the Market House, built in 1710 before the site was acquired by the War Office, and which stood alongside a castle that is no longer in existence.  The Market House building is considered to be one of the earliest surviving market houses in all of Leinster if not nationwide, and differs from the usual Irish market house form in having only one storey.  Over time, it has been used for stabling for horses for the military and subsequently as an outhouse and storage space, and it alone has many stories to tell of the life it has witnessed within.

The barracks was home to the 4th Cavalry Battalion from 1972 until early 2009 when it was closed and the majority of the battalion was moved to the nearby barracks in Athlone.  As in Mullingar, this marked the end of an era for the garrison town as hundreds of people lined the streets to watch the army close the gates for the last time.  The site was purchased by Longford County Council in 2012, with some buildings having fallen into neglect since that date.

This radio documentary series allows for the stories of these immensely historically important sites in Ireland, with hundreds of years of military history within their walls, to be preserved for future generations.

The documentaries were funded by the Broadcasting Authority of Ireland with the Television Licence Fee and produced by Little Road Productions Ltd, based in Co. Louth (www.littleroadproductions.com).

‘Behind the Walls: Connolly Barracks Longford’ will broadcast at 2pm on Sunday April 12th 2020 on shannonside.ie

A promo can be heard below: