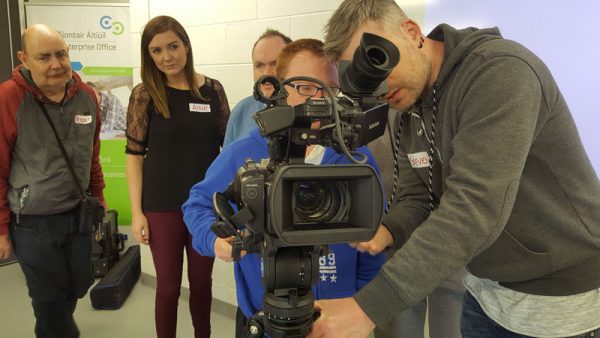 Let Our Voices Be Heard

During the training course, twelve participants from the Venegas Centre (Dundalk), Ablevision Ireland (Drogheda) and Prosper Kells conceived, shot and edited four short documentaries that explored their areas of interest.

The course saw the participants work with professional video gear, visit locations such as Aiken Barracks, the Louth County Dog Pound and McAteers The Food House to shoot their documentaries, before engaging with the video editing process, all the while supported and encouraged by their mentors – Joske Slabbers, Steven Larkin, Jim Kealy and Ultan Hodgers – all graduates of the BA (Hons) in Video & Film Production from Dundalk IT.

The project was funded by the Broadcasting Authority of Ireland, Create Louth and Meath Arts Office.

Funded by the Department of Arts, Heritage, Regional, Rural and Gaeltacht Affairs under their Co-Operation with Northern Ireland funding scheme, this was a series of training workshops held in Creative Spark in Dundalk, to teach the participants from Ablevision Drogheda and the Newry Gateway Club the fundamentals of conceiving, shooting and editing a some short videos together exploring their own role in society, which were premiered at the 3rd annual Ablevision Film Festival in Drogheda on November 3rd 2016. This was the first time that the two organisations from North and South had worked together.